US Naval heraldry is known as the Ship’s Crest, commonly the logo of the ship, and reproduced on hats, uniform patches, stationery, plaques, and souvenirs related to the ship.

The USS Delaware (SSN 791) Ship's Crest is a hand-drawn theme which represents the simple submarine crests of WWII, a modern submarine silhouette around a Fighting Blue Hen, with a traditional navy blue background.
Two dolphins adorn the bottom of the crest, one silver and one gold, which represent the enlisted and officer warfare insignia.
The “First Defenders of Liberty” acknowledges the State of Delaware’s status as the First State to ratify the US Constitution.
Delaware’s official state bird, the Blue Hen, dates back to the Revolutionary War when a company of soldiers from Delaware, known for their courage acquired the nickname “Sons of the Blue Hen.” It is said to have come from the fighting offspring of a particular hen owned by their captain, John Caldwell, they were famous for winning cock fights.
Additionally, there are 2 clusters of 3 stars, the 6 stars representing each of the 6 Naval vessels previously named for the First State (please see the History tab). 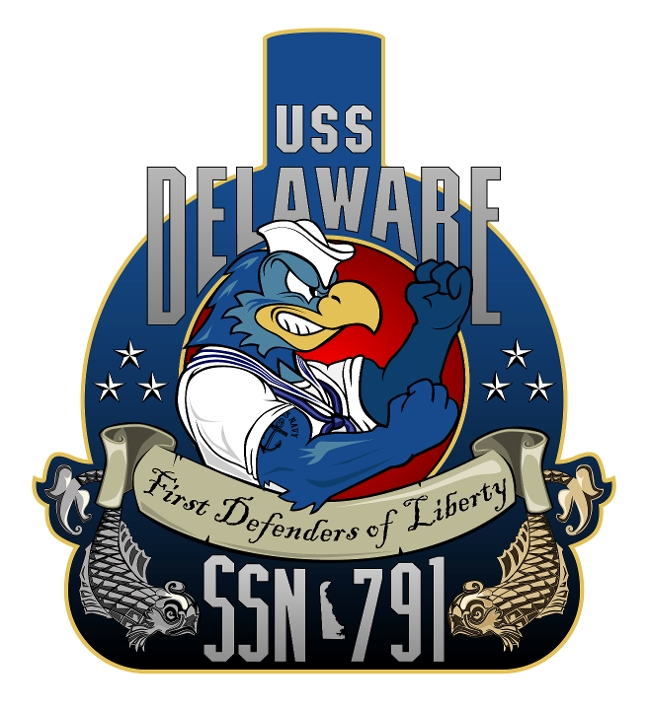