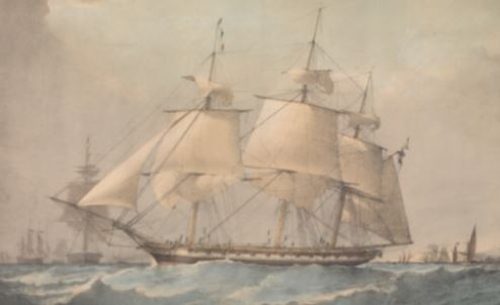 USS Delaware was a 24-gun sailing frigate of the United States Navy that had a short career in the American Revolutionary War as the British Royal Navy captured her in 1777. She was built under the 13 December 1775 order of the Continental Congress in the yard of Warwick Coates of Philadelphia, Pennsylvania, under the direction of the Marine Committee. Upon her launching in July 1776, Captain C. Alexander took command. Delaware served in the Delaware River, joining with Commodore John Hazelwood's Pennsylvania state ships in operations that delayed the British Fleet in approaching Philadelphia and supplying the British Army. When the British took possession of Philadelphia 26 September 1777, Delaware, now under the command of John Barry, in company with several smaller ships, advanced upon the enemy fortifications which were being erected and opened a destructive fire while anchored some 500 yards from shore. On 27 September she went aground on the ebb tide and came under the concentrated fire of the British artillery. After a brave defense against overwhelming odds, Captain Alexander was compelled to strike his colors. Delaware was taken into the Royal Navy. The Royal Navy took her in as an "armed ship", and later classed her a sixth rate. As an armed ship her captain was Commander James Watt. In April 1778 Commander Christopher Mason commissioned her. On 1 December 1779 Delaware escorted a convoy of supply ships to Bermuda and brought some 100 officers and men of the Royal Garrison Battalion of Veterans to defend Bermuda. She and the troops arrived in time to forestall an American attack. When four American naval vessels arrived later that day, they saw Delaware in place and British troops patrolling, and so left quickly. On 6 June 1779 HMS Daphne captured the American privateer Oliver Cromwell. Delaware and the privateer Union were in company and so shared in the prize money. The Royal Navy sold Delaware on 14 April 1783 for Â£300 to Mary Hayley, who renamed her United States. She sailed from Falmouth to Boston in April 1784. Hayley had the boat fitted out as a whaler and seal hunting vessel, shipping to the Falkland Islands in late 1784. The ship returned in 1785 with a cargo of whale oil, which was seized by customs agents. After a trial, the Crown lost its case against Hayley for duty, as she was a British citizen, and was ordered to pay her Â£4,000 for her losses. In the fall of 1786, Francis Rotch reported that Hayley had sold the United States to the firm, Brothers DeBauque, and that he had advised them to send the ship to the Falklands rather than Greenland. United States may have operated under both that name, and under "Dauphin" for some years. In May 1794 Dauphin arrived at Charleston, South Carolina. She was sold at auction on 23 June to Jean Bouteille who wished to convert her to a privateer. Despite efforts by Benjamin Moodie, the British Vice-consul in Charleston to block her conversion, in March 1795 she was ready and sailed for Port-de-Paix. Her ultimate fate is unknown.