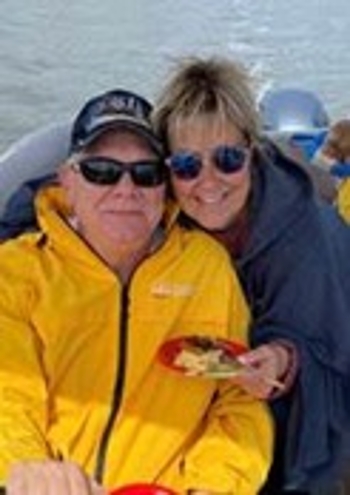 Tar Heel born, and Tar Heel Bred…  and hopefully, not too soon… a Tar Heel dead !!
Jim Provo graduated from the University of North Carolina with a degree in Physics. He served as Midshipman Commander of the Naval ROTC unit during his senior year and was awarded the Navy League Award for Academic and Leadership Excellence.
While an officer in the United States Navy, Jim served aboard 5 Submarines and 1 Submarine support vessel in various capacities and qualified as both a Nuclear Engineering Department Head, and as a Strategic Weapons Department Head. Jim served as the Radiological Controls Officer overseeing all nuclear work and radiological waste disposal for a squadron of 10 submarines.  Jim was spot promoted to Lieutenant Commander early, at 8.5  years of service. Serving on the Governor’s Disaster response team as the Navy representative for the Charleston, South Carolina area, Jim led the Navy efforts in response to hurricane Hugo.
After the Navy, Jim started his own Financial Advisory business in Charleston, South Carolina. Over the next 18 years, Jim served in, opened, and managed business operations in 5 states and 2 foreign countries. At its apex, his offices had over 10 advisors and 20 employees. He assisted more than 20 other entrepreneurs in establishing their businesses along the way. His business won multiple awards including; two ‘Dream Team’ awards for superior performance, National Developer of the Year Award for expanding new markets, several leadership and Regional District Manager awards, and 17 consecutive yearly awards for top ten per cent performance, including 5 years in the top five per cent.
Jim joined the SBA in December 2008, (his lovely and talented wife, Kim,  now runs a Financial Advisory business) and has served as the Veterans Representative, Economic Development Specialist, and Public Information Officer.
Together, they have opened two units of a new franchise in Delaware consisting of 50 Hair Salons and Spas.  (this despite Jim having little hair in need of servicing). A third location is planned for 2022 with another 25 salons and spas. He serves as Treasurer of the Mid Atlantic Chapter of the United States Submarine Veterans Inc.  They reside in Dover, Delaware, and have 5 children, including the newest addition, 11 year old Julia.

Return to Board of Directors